An Encouraging Update from New Hope

This children's home, New Hope, located in Peru, is one of our Global Partners whose mission is to serve orphaned and vulnerable children. We wanted to share this update from Tony Bolos, their Executive Director, of a recent addition to their home, a little girl named Kassandra. *at the request of our Global Partners, please do not share pictures of the children over social media.

We first wrote to you back in July about Kassandra, our sweet baby girl with a severe cleft palate who had just come to New Hope. Thank you to all of you who have written asking about her - it means a lot to know that people thousands of miles away are concerned for her well-being and have been praying for her. In July and August, we received donations above and beyond what we need for Kassandra for this year, including the costs of her operations and ongoing therapy. A huge thanks to all of you who sacrificed and gave so that we can care for this little girl with the dignity that she deserves. 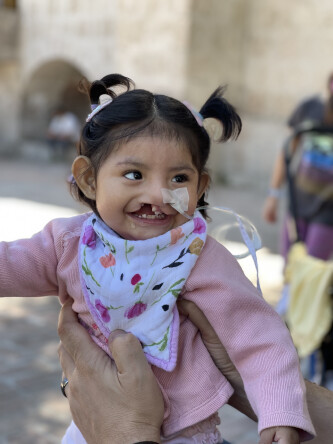 The change in Kassandra over the past several months has been wonderful to witness. When she came, she was barely moving; she couldn’t focus her eyes on anything stationary, grasp onto any object, or hold her little body upright. She can now sit up on her own, roll around (her favorite activity!), push herself up into a crawling position, and is now on the brink of taking off crawling. A consistent message from all of her doctors has been this: It is a miracle that she’s alive. We agree and believe that God has watched over her in the darkest of times.

Since coming to New Hope in July, Kassandra has gained nearly 5 pounds. Her nasal feeding tube has allowed her to gain weight effortlessly and has propelled her to reach so many developmental milestones that had been long delayed due to her malnutrition.

Here is a story which I think highlights God’s protection in Kassandra's life. She has two older brothers, ages 8 and 10, who have also been recently placed in a children’s home. They came to visit several months after she arrived, and two incredible things happened. First, as soon as she saw her older brother, she burst out in cries of joy. She was bouncing with so much excitement when she saw her oldest brother that she nearly bounced out of the arms of our social worker who was holding her! As her brother held her, she nestled her little face into his shoulder. There was not a dry eye in the room.  The next thing that happened was a story that her oldest brother shared with us. He told us that he had been responsible for feeding her at home, as their parents had practically abandoned all their children at that point. He would gather tin cans of milk and feed her drop by drop with a straw all day and night. This awareness and kindness from her older brother (who was 9 at the time), most certainly kept her alive. We are grateful that God placed people in her life to watch over her until she arrived at our doors.

As far as her operation to begin repairing her cleft palate, we are very close to reaching that point! We have spent many hours with doctors in Arequipa trying to determine the best way to proceed. Earlier this month we flew to Lima for an additional consultation at the National Children's Hospital. Because of her low weight and other medical conditions, there has been some hesitation to move forward with the operation. Two Dutch doctors are arriving in Arequipa in early November and for now, the plan is that one of them will proceed with the operation. Please pray with us that these details will be firmed up soon and that Kassandra will have the strength she needs to go forward with the operation.

Thank you for your continued compassion and prayers for this sweet girl that has stolen all of our hearts. We see God providing for her in so many ways. We've listed a few specific prayer requests below and would so appreciate your partnership in praying for Kassandra and her story continues to unfold.

The Spirit of Truth

The Global Fight for Our Youth